Depicted at the flyover for the opening ceremonies of EXPO 67. 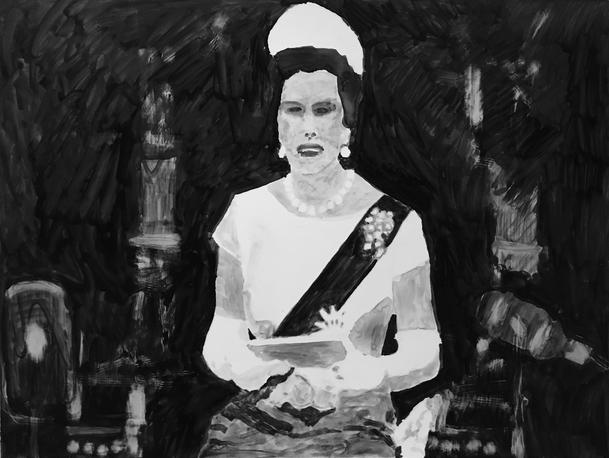 "Ahead by a Century” references both Expo 67, held in Montreal in Canada’s centennial year 1967, and the Tragically Hip song by the same title. The lyrics “...and that’s when the hornet stung me” resonate with my personal realization of how what it means to be Canadian is changing. Former Tragically Hip front man Gord Downie was instrumental in changing Canada's national discourse.

Screenshots, film stills and photos from NFB, CBC, Library of Canada, and private archives are used as source material to explore the passage of just over 50 years since the event. This year I retraced my 1967 EXPO visit and walked both of the man- made islands in Montreal created expressly for EXPO - Ile St Helene and Ile Notre Dame.

I have employed digital techniques to create reductive black and white images from the source images and films. My strategy has been to use loose and incomplete rendering, painted in brush and ink, so that the image is left opened for interpretation, collaboration and interaction. I have created large and small scale images to play with how national messages might be manipulated. The black and white expression of ink on paper minimizes colour interference and evokes pre-digital authority of the image derived from television newspaper, film and analog camera references.

“Ahead by a Century” is my largest series to date. It looks both forward and backward in order to challenge our ideas of modernism and modernity in a Canadian context.

MASON - This large scale 48"x60" is based on a portrait of my great grandfather. Again addressing the weight of family history

The authoritative mountie on horseback challenges the gaze of the viewer through composition, authoritarian symbolism and the interplay of ambiguity and resolution. It is based on film footage shot in 1967.

This work is based on the queen’s CBC TV address from Parliament Hill on July 1, 1967. I attempted to create a stark, provocative, authoritative and unflattering portrait of the queen. Queen Elizabeth's CBC television address July 1st, 1967. 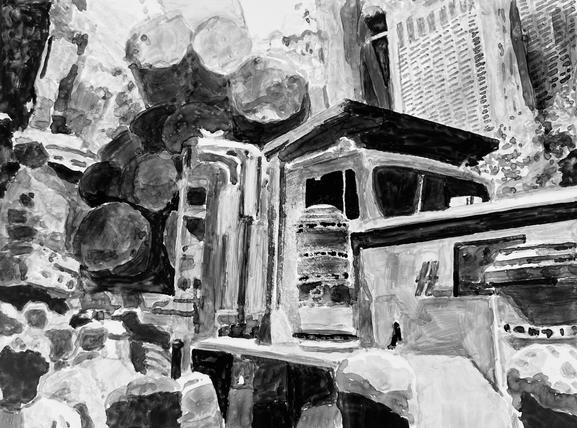 This piece depicts the Canadian pavilion called Katimavik (or meeting place in Inuit). I wanted to convey a foreboding tension and the potential precipice that is modernity. 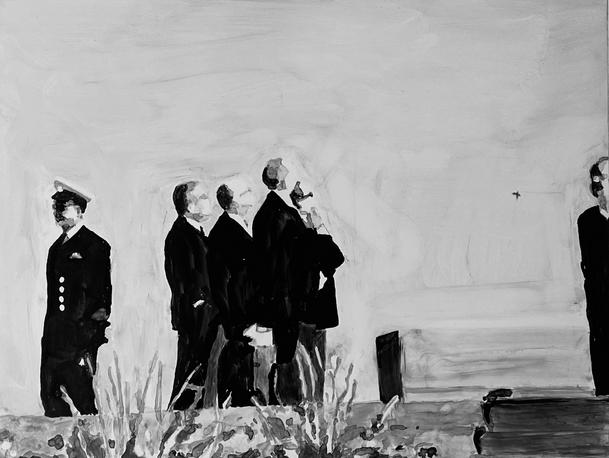 The EXPO monorail comes from and goes to an unknown destination a metaphor for modernism.

This vague but formal occasion of the erection a one of indigenous artist Alex Janvier’s circular artworks challenges the idea of a sign, and relates it to what was known about the Indians of Canada Pavilion by average Canadians in 1967. 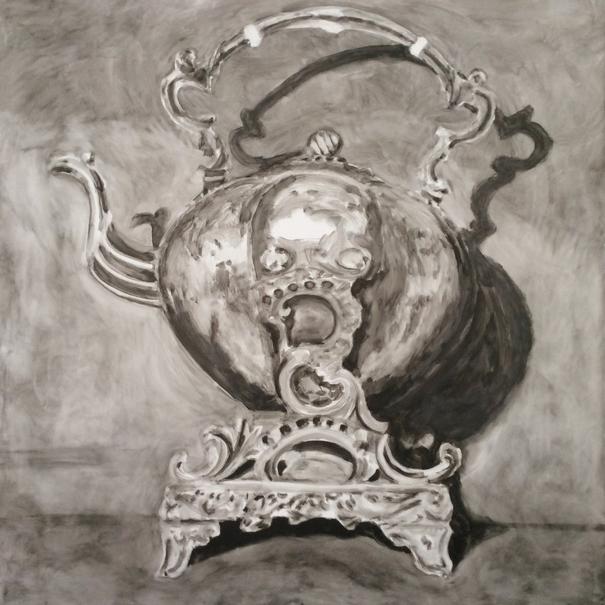 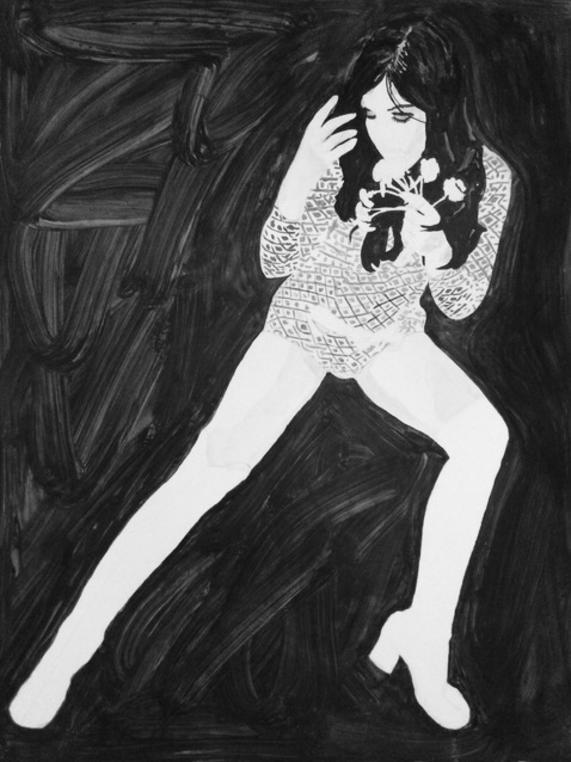 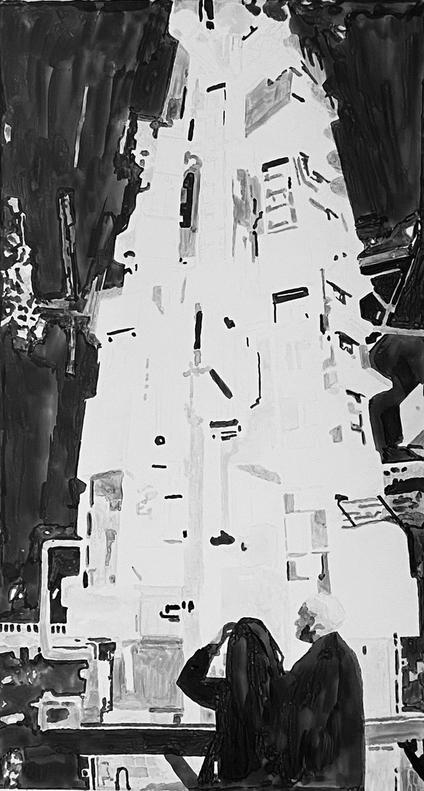 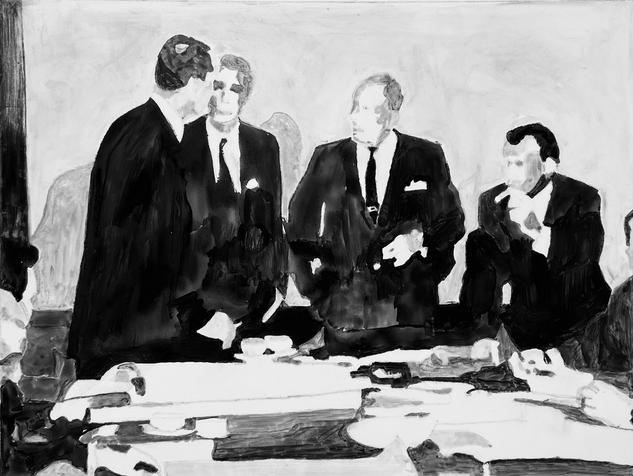 From the Man the Producer pavilion. This towering assembly line is impressive and perplexing. 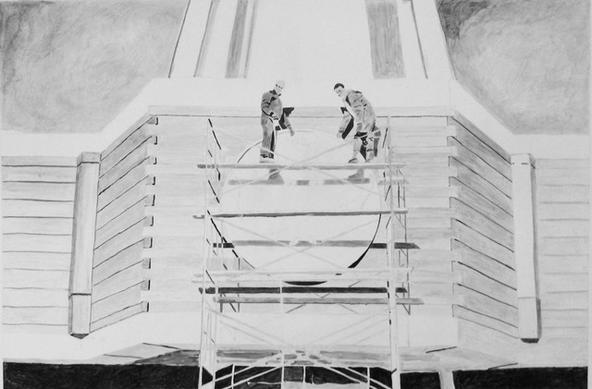 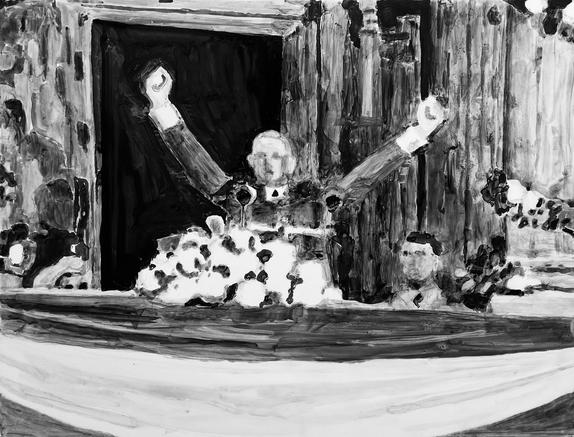 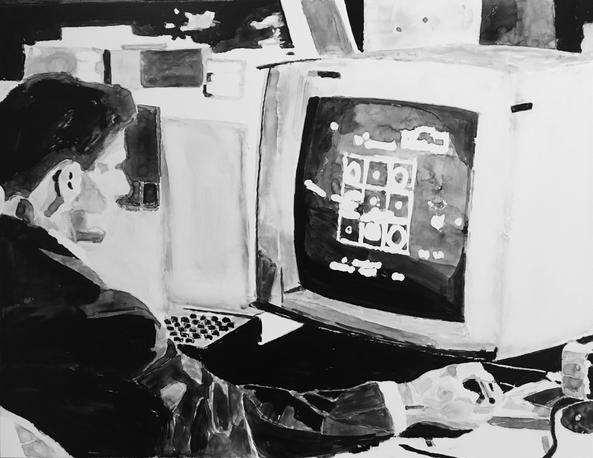 This figure occupied a central place in the Telephone pavilion where push button and cordless phones were demonstrated as the future.

INHERITANCE - this image monumentalizes the idea of the weight of history that heirlooms carry. This a silver tea pot from my great grandparents.  60"x60" ink on paper.

From a corporate video from the EXPO train manufacturer Hawker Siddley. 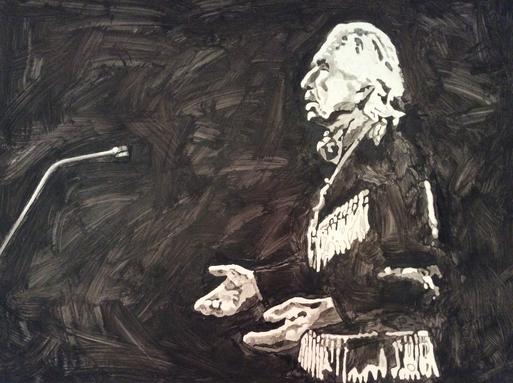 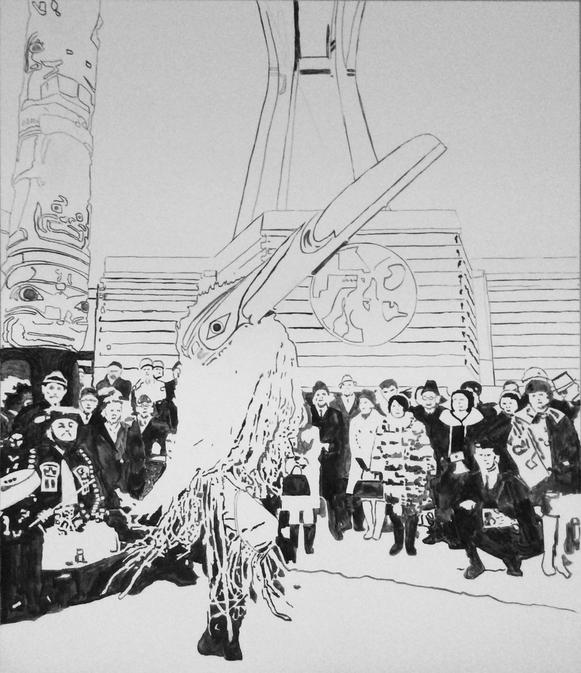 This effort is designed to create more questions than answers . It is a critical view of the degree of denial of history, socialization, alienation and conformity that the modernist EXPO required. An indigenous hostess welcomes people to the Indians of Canada pavilion. 48”x60” ink on paper. 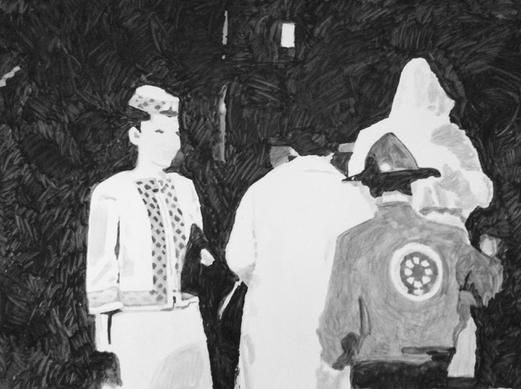 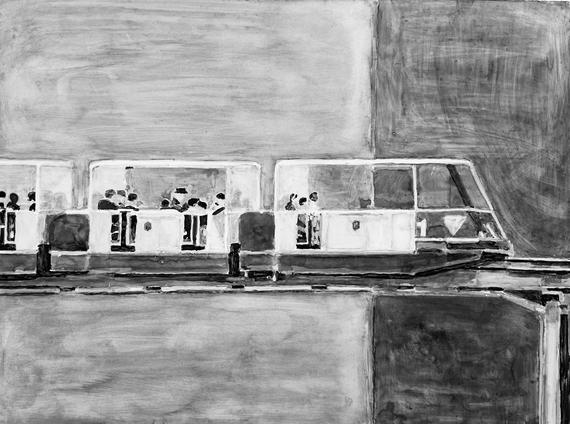 A snapshot of technology being demonstrated in 1967 From the Communications pavilion. 11”x14” ink on paper

This self portrait is based on my realization that as an older white male who attended EXPO 67 as a young child, I am complicit in its legacy. It is very difficult to say anything on many contemporary topics, especially indigenous affairs.  48"x48" acrylic on plywood

A lumber truck and crowd at the Man the Producer pavilion, before environmentalism.

Singer Michele Richard was a French singer for one of the official theme songs for EXPO 67. She exemplifies the provocative and sexy 1960’s silhouette, and the prevalence of “girl watching” at EXPO 67. I did two versions of this piece to explore more versus less saturated backgrounds to see what would create the most compelling image. The image is derived from a 1967 album cover. 48”x60” ink on paper.

The US and Russian pavilions symbolically oppose each other.

My choice of black and white is intended to invoke authority and nostalgia from print and early television sources, while at the same time creating some critical and historical distance.  This image is based on a screen capture of Chief Dan George’s “Lament for Confederation” broadcast on CBC television in November 1967. I am trying to create mystery and tension so that the viewer is compelled to find out more about this dramatic figure and his message. I have chosen minimal, reductive titles for all of the work so that maximum room is left for exploration and discovery.

This outline is based on a rare photo was used to reinforce the idea of spectacle combined with the mystery of indigenous Canadians in 1967. 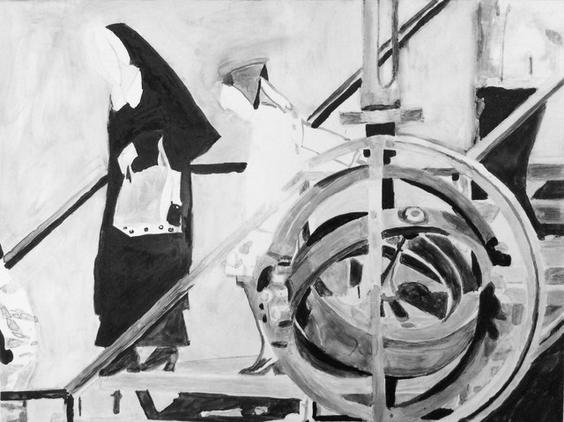 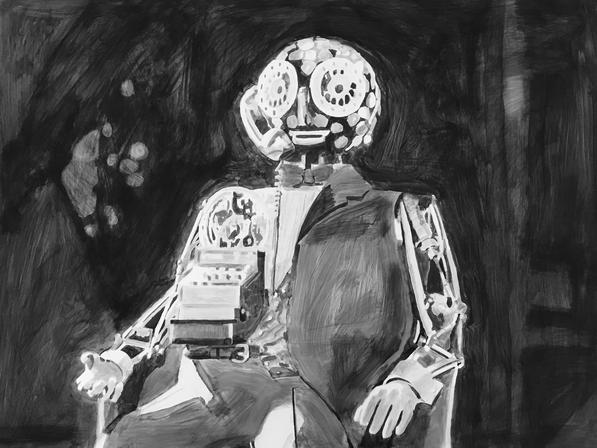 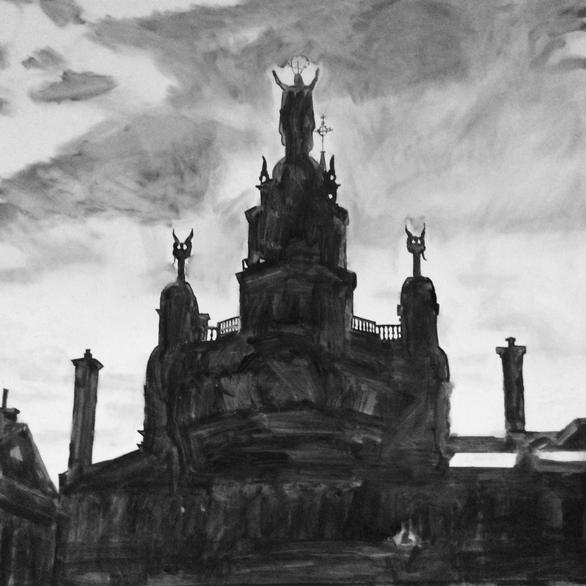 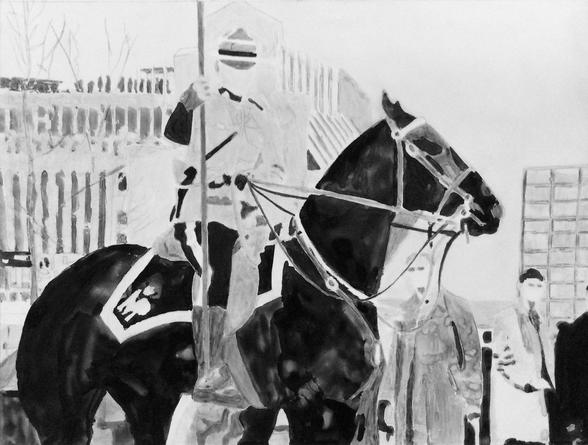 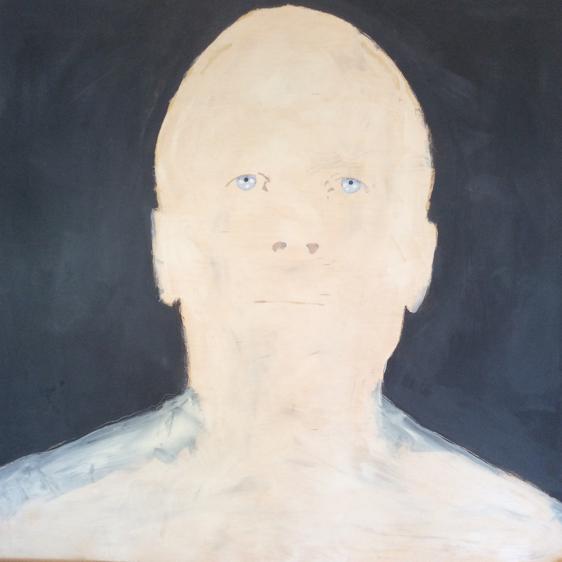 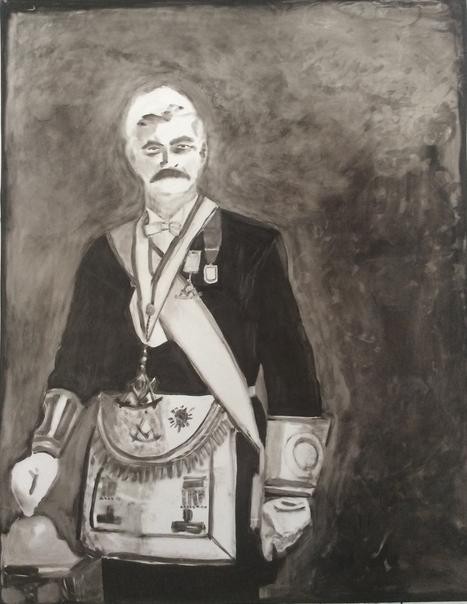 President of France Charles de Gaulle delivered his inflammatory speech punctuated by "Vive le Quebec libre!" This caused a diplomatic stir and necessitated his quick exit back to France. 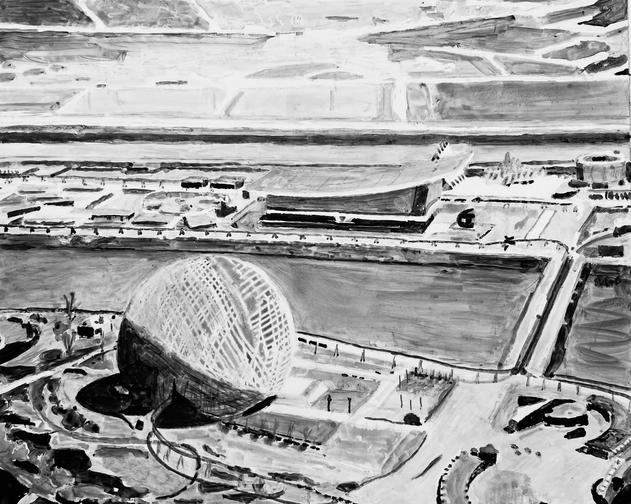 The composition of this screenshot from a 1967 video was carefully chosen to provide stark contrast and tension between the prevalent religious values at the time versus the promise of modernity. The incomplete figures suggest that this dynamic tension is unresolved. 11”x14” ink on paper.

This work describes the power and omnipresence of the church in Quebec in 1967. The churches did good and bad. Located in Old Montreal this church was an important  meeting place for sailors and generations of immigrants. 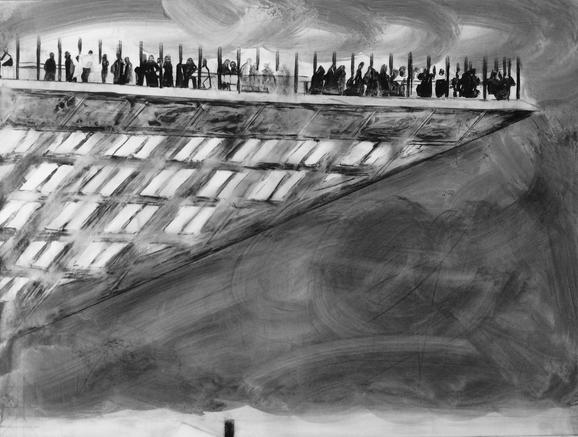