The figures are wrapped and bound for storage. They are then ceremoniously unwrapped. 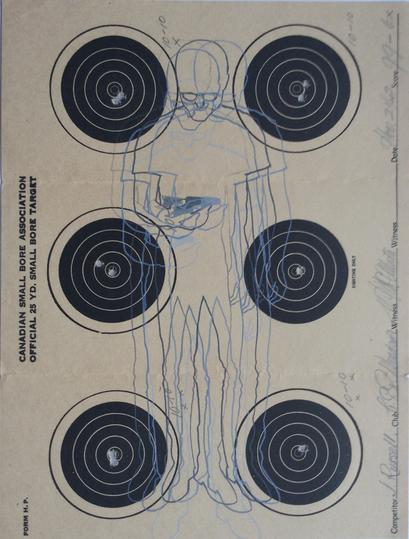 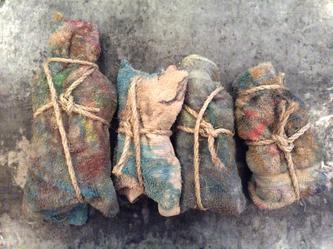 “Journey” is an amateur craft style artwork that is declared the most important work of the decade by my fictitious World Council for Important Contemporary Art. It is presented in an important main lobby public space at OCADU without permission, The programming of the main lobby space is strictly controlled by the University administration.

The placement is intended to challenge our perception of how an objects’ importance is established, what it means to their significance in creative culture, commercial value, student competition, status and identity in a creative context.

OCADU allowed this piece a central place in the lobby for two weeks, confirming that limitations were mostly perceived and not real.

These images use water and vintage target practice targets(referencing JasperJohns) to express the difficulty of finding physical location in space, and the meaning of representation. 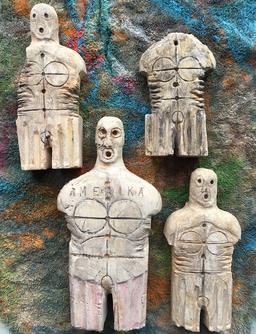 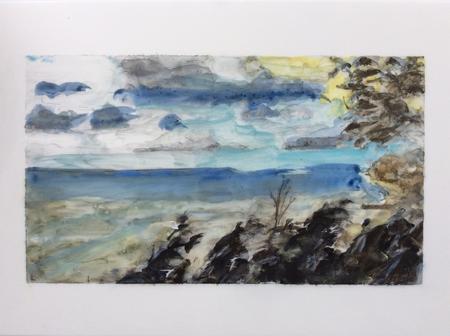 I completed these small gouache and pencil studies on mylar to quickly capture impressions of nature in transition. 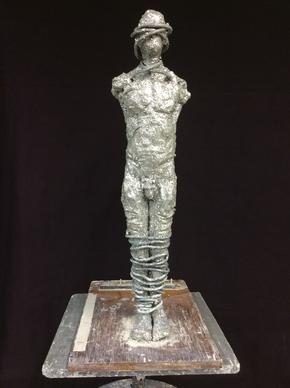 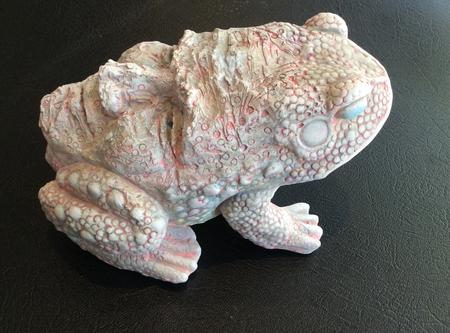 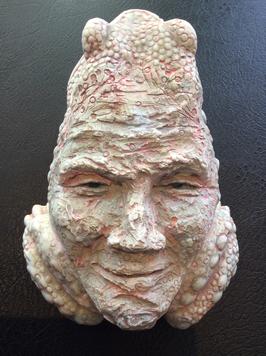 This clay and wire life study was covered in glitter and then torn down. This work is a direct criticism of the 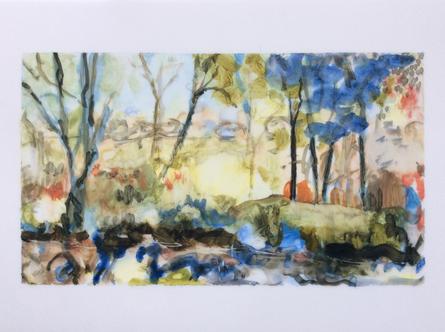 "This is Not a Shotgun"

This series begins with a shotgun blast to a plywood surface. The violence and immediacy of this intense moment is used as a jumping off point for the application of color and composition. "This is not a shotgun" questions the idea of representation and references Rene Margritte's pipe.

This screenprint provides layers a narrative and calculation between the group of figures and a compelling object. 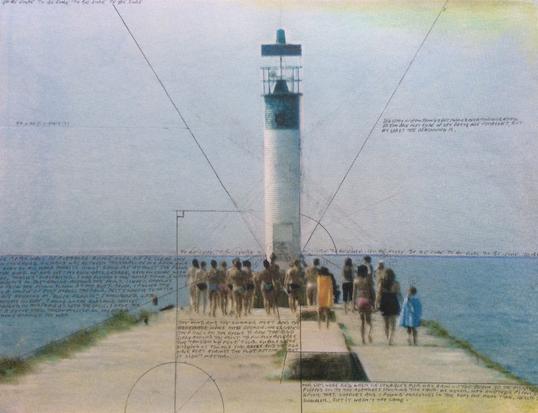 I combined a garden toad with a sculpted face to produce an uncanny toad.To explore the feeling of the uncanny 4 silicone molds were created, three of faces that I have sculpted and one of a toad that is a garden ornament. Two plaster toad-humans were created to convey an uncomfortable, somewhat hallucinogenic mixture of something that is both familiar and bizarre. The viewer is intended to at first find the mixed toad-human strange, then to imagine what it might feel like to find oneself as a toad. Close attention was paid to the materiality of plaster, it is celebrated in “Candy Toad”.

“Candy Toad” is intended to convey the chalky, powdery, retro candy-like feel of plaster. It is similar to both candy cigarettes and candy necklaces.  The color choices from Popeye candy cigarettes as well as the use of candies from a candy necklace, support these similarities. For this project a person has been transformed into a candy toad and they are not at all happy about it. The object is intended to be attractive and puzzling because it is possibly made entirely of candy, yet conveys an intense emotion of anguish rather than the expected happiness normally associated with sweets.

On the other hand “Bliss Toad” has found himself quite happily embedded in a toad. This state of stoned contentment is not what would be typically imagined for this scenario. Color and texture are used to unify the piece. 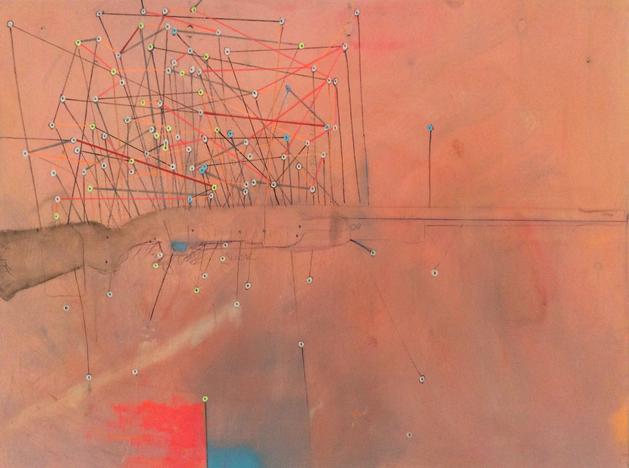 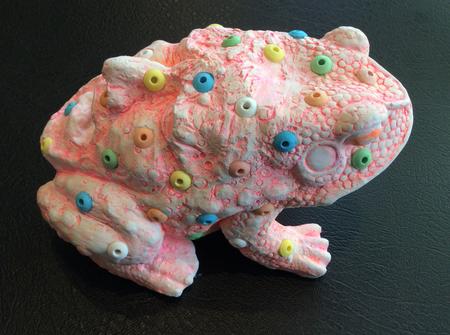 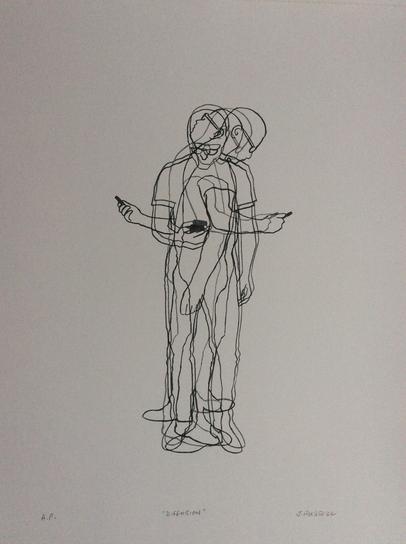 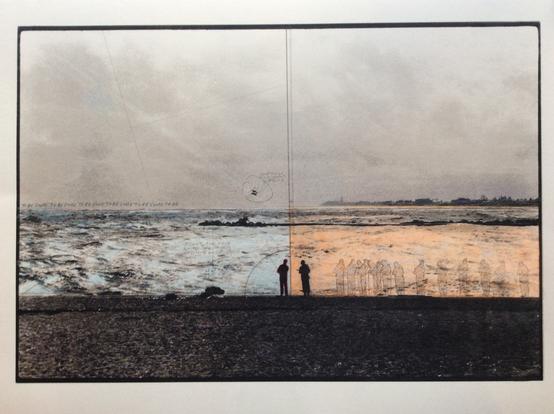 This screenprint series examines the destabilization of the physical human form caused by new spaces created by digital communications.

These images fit into my larger studies and theory of Digital Cubism. 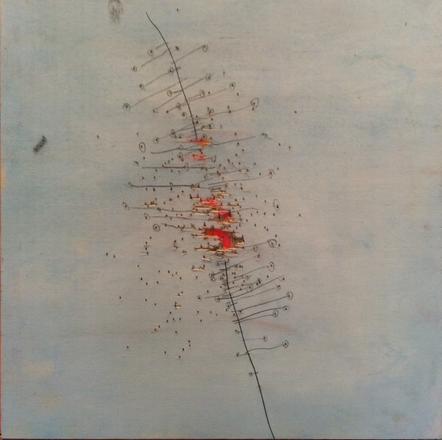 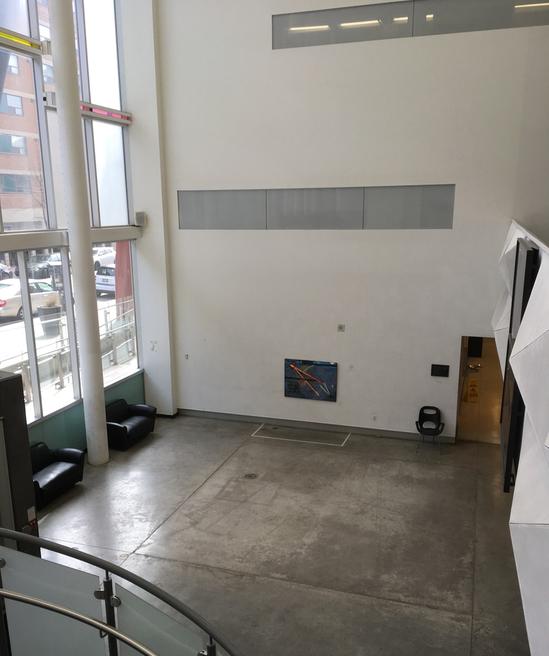 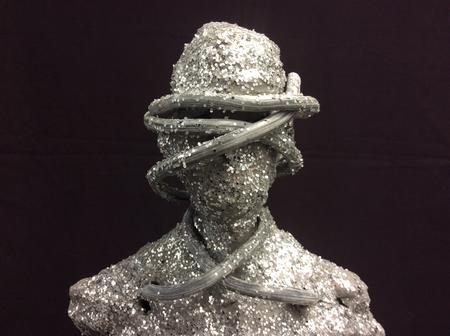 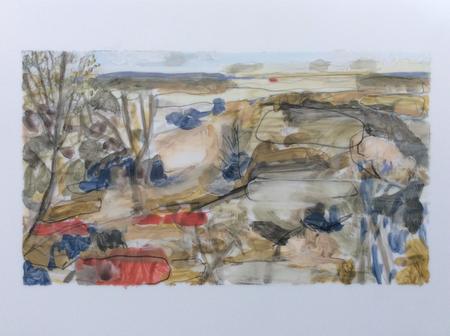 These plaster figures are intended to represent some ancient artifacts found at some point in the distant future. They are carefully handled with reverence. 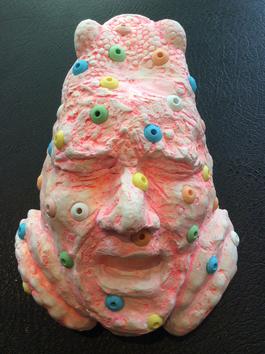 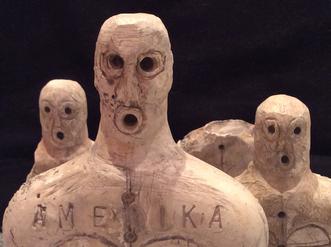 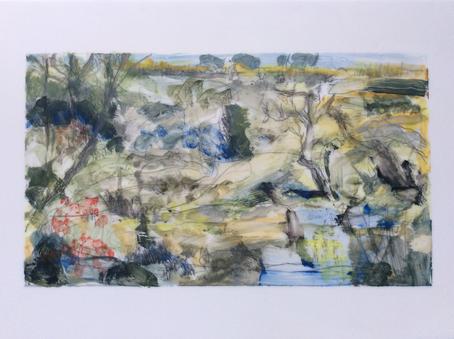